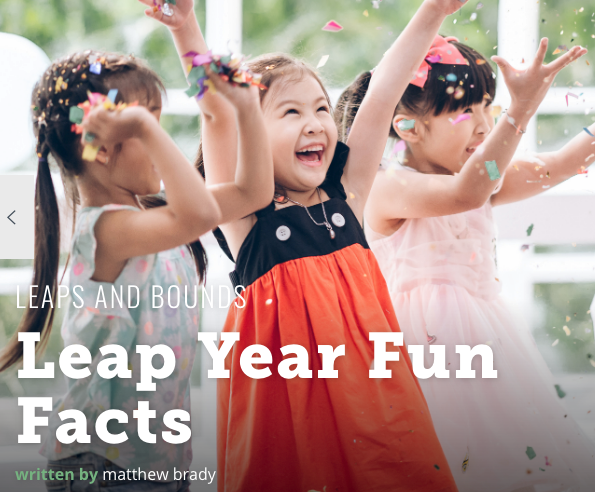 When you think about it, a leap year is fascinating in many ways, and not just because of its history. Since it occurs mostly every four years, it is ripe for interesting lore, wacky tidbits, and general quirkiness.

- If you are a leaper (the popular moniker of people born on February 29), when exactly do you celebrate your birthday three out of every four years: February 28 or March 1? It’s up to you, of course, when to have your party. However, when it’s not a leap year, you probably have to wait until March 1 for your age to change.

- Hail to the chief: most US presidential elections fall in a leap year, giving you an extra day to ponder your vote.

- Legend has it that a pair of Irish saints (Brigid and Patrick) agreed that women would be allowed to propose to men on Leap Day, and some places even had edicts about it

- The town of Anthony, Texas, and neighboring city Anthony, New Mexico, are considered the Leap Capital of the World and join forces to hold a Worldwide Leap Year Birthday Celebration.

- Talk about defying the odds: a European family named Keogh has three generations of relatives born on leap day: Peter Anthony Keogh was born in 1940, his son Peter Eric in 1964, and his       granddaughter, Bethany Wealth, in 1996.

- Even rarer: siblings being born on leap day. Norway’s Henriksen family has the Guinness world record for this, as the sister, Heidi, was born on February 29, 1960 and her brothers, Olav and   Leif-Martin, on the same day in 1964 and 1968, respectively. Think of the money the Henriksens could save on birthday presents!